The End of the Road – for the CCDG

As readers of this blog are well aware, I have for a while now followed the longstanding dispute between the two Declans – Declan McGrath, well-known author and conservationist, and Declan Mulhearne, the Chairperson of the Comeragh Community Development Group (CCDG).

The dispute between the Declans came about as a result of an illegal road constructed by the CCDG through the scenic Mahon Falls valley (Coum Mahon).

The WCCC (on foot of complaints by Inland Fisheries) finally referred the matter to An Bord Pleanala (‘the ABP’) as to whether they could regard the road as “exempted development”. This was strange coming from the WCCC, a Planning Authority, in light of the fact that the WCCC have been involved in three other identical incidents, and on each occasion it was made clear that a road in an SAC can never be “exempted development”.

The ABP ruled quite clearly and unconditionally that the road is indeed illegal and that it is not an exempted development, as originally claimed to me by Declan Mulhearne.

NOW THEREFORE An Bord Pleanála, in exercise of the powers conferred on it by section 5 (3) (a) of the 2000 Act, hereby decides that construction of a road at Coum Mahon, Mahon Valley, County Waterford is development and is not exempted development”.

The ABP Inspector highlighted the anomaly that public funds were used for a private development on privately owned land and commonage:

“With regard to the question of whether it is or is not exempted development, a relevant consideration is whether the works were carried out as part of the works of a statutory undertaker or public body (Article 80). It appears that public funding was used for the works, and the report from the planning authority does not address the issue, but it seems clear to me that it was undertaken by a private body on privately owned lands (which are not part of Coilte works), and the land is not part of the public highway, and is not part of an existing private street, road or way, and as such is not exempted under Schedule 2, Part 1, Class 13.
8.2.2. The land, while open and a mix of privately owned land and (possibly) commonage, is not a park, open space or ornamental garden, or used for athletics or sports. It is open ground used seemingly for sheep grazing, or is untended heath/bog. As such, I do not consider that it is exempt under Schedule 2 Part 1 Class 33.
8.3. As such, I do not consider that the development come within these, or any other exemption class and so is not exempted development.”

The APB Inspector was even more forthright and scathing of the antics of the CCDG and its blatant disregard for the environmental sanctity of this once beautiful and protected area:

8.4.1. Notwithstanding the issue of my assessment above of the works not being exempted development, works are not exempt if they would require an EIS or NIS.
8.4.2. The structure is in excess of 2 km, so would, under Schedule 5, Part 2, Class 10(dd) (private roads in excess of 2000 metres) require screening, and while I acknowledge some ambiguity about the nature of the structure, I would consider, having regard also to the provisions of Schedule 7 of the Regulations, that there is a reasonable likelihood that it would require an EIS, especially having regard to the likely environmental impact of the works and the cumulative impact with the hydroelectric scheme (which was granted permission in 2005 with an EIS).
8.4.3. The issue of Appropriate Assessment is much more straightforward. I would refer the Board to the document ‘Assessment of Impacts on Comeragh Mountains SAC’ dated Dec. 2015, competed by Wetland Surveys Ireland on behalf of the Council.
On the basis of my site visit, I can confirm that the survey details of the impacts are consistent with my observations. The upper levels of the works run directly through part of the designated SAC. There is no question but that the works have caused significant direct effect on heathland (Annex I habitat) within the designated SAC by way of direct excavation and coverage by spoil – the report estimates that around 0.4 ha. of Annex 1 habitat has been destroyed – I would consider this an accurate assessment. There is also visible evidence of run-off to the stream, which includes another Annex 1 habitat ‘’floating river vegetation’. As such, as there is the significant disruption/destruction of habitat identified as ‘Dry Heath’ [4030] and ‘Wet Heath’ [4010], there is a significant effect on a Natura 2000 site in view of the sites conservation objectives. An NIS would therefore have been required. As such, the works cannot be considered to be exempted development by virtue of Article 9(i)(viiB) as it would have required an NIS.

Despite these conclusive and damning findings by the ABP, the Comeragh Community Development Group still had the audacity to recently respond to this Report by stating in a local newspaper that this monstrosity that is carved into protected land was a “woodland walk”.

“It is around 3-5 metres in width, very unevenly surfaced, with open cross-drains. It is approximately 2,700 metres in length.”

Does this look like a “woodland walk”? (The only woodland on this road is the smashed woodland caused by the digger when digging the road). This “woodland walk” is wider than the existing road used for vehicles! 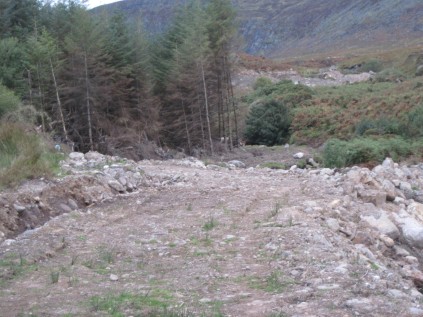 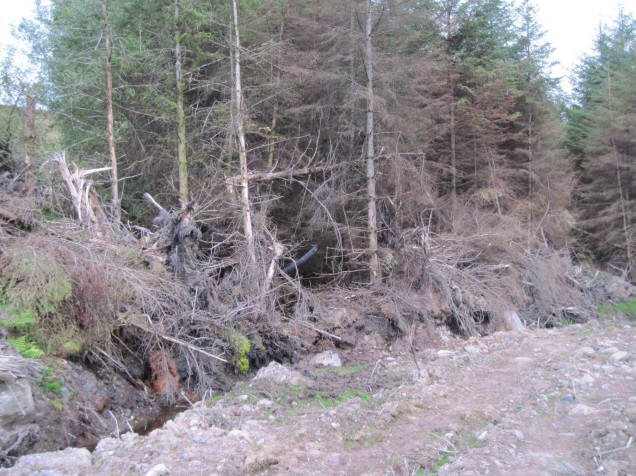 Shame on you CCDG. It surely must be the end of the road.

Neil van Dokkum (B. SocSc; LLB; LLM; PGC Con.Lit) Neil is a law lecturer and has been so since arriving in Ireland from South Africa in 2002. Prior to that Neil worked in a leading firm of solicitors from 1987-1992, before being admitted as an Advocate of the Supreme Court of South Africa (a barrister) in 1992. He published three books in South Africa on employment law and unfair dismissal, as well as being published in numerous national and international peer-reviewed journals. Neil currently specialises in employment law, medical negligence law, family law and child protection law. He dabbles in EU law (procurement and energy). Neil retired from practice in 2002 to take up a full-time lecturing post. He has published three books since then, “Nursing Law for Irish Students (2005); “Evidence” (2007); and “Nursing Law for Students in Ireland” (2011). His current interest is the area of disability as a politico-economic construct. Neil is very happily married to Fiona, and they have two sons, Rory and Ian.
View all posts by Neil van Dokkum →
This entry was posted in Comeragh Mountains; Declan McGrath, EirGrid; Insurance; Law; Cancer; EMF and tagged corruption, County Manager, Fianna Fáil, Fine Gael, green, Ireland, public funds, renewable energy, tort, vehicle, Waterford Council. Bookmark the permalink.