An interesting commentary from Pat Swords on the North-South Interconnector:

“Some thoughts and facts about the Ireland of today with further confirmation that we don’t live in anything that even remotely approaches a Democracy. Still one gives it a ‘poke’ and it interesting to see what comes out.

The background to this is the North South Interconnector which is a 400 kV pylon route of 140 km in length from the South of Meath some 34 km into Tyrone, with a cost of some €250 million. The reason for it? It is part of the €4 billion high voltage grid expansion for the Island of Ireland to facilitate a target of some 40% wind energy (42% in N. Ireland target). Let’s face it for years the Irish grid functioned perfectly well without this project. Pretty picture of typical 400 kV pylon below, plus this project directly facilitates the roll out of more than 600 MW (> 300 turbines) in Donegal and West N. Ireland.

Naturally, it is contentious. As a Strategic Infrastructure Development it went straight into An Bord Pleanala, with the only right of review being into the Courts. Under the UNECE Convention and the European Law which implements it, such a legal appeal is meant to address the substantive and procedural acts and omissions. In practice, an Irish Court will not look at a substantive issues, i.e. related to the merit of the decision making, unless you can first prove that the Government official acted so irrationally that it defied common sense. So your only chance is on procedures.

At the Bord Pleanala stage an unprecedented 871 submissions costing €50 each were made by individuals and groups of individuals working together. Plus people put a lot of time and effort in to present at the oral hearing. An Bord Peanala file: http://www.pleanala.ie/casenum/VA0017.htm

You will notice that a repeated theme of the public from the summary of their submissions, was why do we need this project and there are huge illegalities in the manner this renewable programme has been adopted:  http://www.pleanala.ie/documents/reports/VA0/RVA0017A.pdf

However, An Bord Pleanala ruled all matters connected with the need for the project and anything related to overarching plans and programmes as out of the scope of its decision making. Instead this decision-making was limited as to whether it went overground or underground and the final routing, i.e. left or right. The Convention and the EU’s Environmental Impact Assessment Directive, which transpose it, require “effective public participation when all options are open”. The UNECE’s Recommendations and International ‘case law’ on public participation are clear: Participation means that there must be a possibility to influence the decision. Note: Consultation is when you tell them what you are doing, participation is when it can be influenced. Secondly, decision making often occurs in tiers; for example some overarching decisions being taken at a plan / programme level and then others at the subsequent project level, for which as the Recommendations explain:

• F. Early public participation when all options are open (article 6, paragraph 4) 78. In the case of tiered decision-making (see para. 17 above), in order to ensure early and effective public participation when all options are open: a. There should be at least one stage in the decision-making process when the public has the opportunity to participate effectively on whether the proposed activity should go ahead at all (the zero option) (see also para 16 above); b. In addition, at each stage of a tiered decision-making process, the public should have the opportunity to participate in an early and effective manner on all options being considered at that stage; c. Information about the decision-making in the earlier tiers should be available in order for the public to understand the justification of those earlier decisions — including the rejection of the zero option and other alternatives; d. When in a tiered decision-making process new information subsequently sheds doubt on decisions made in the earlier tiers or stages or severely undermines their justification it should be possible to reopen these decisions.

Needless to say the public were never involved with the decision-making on the National Renewable Energy Action Plans for 40% renewable electricity, which included this grid programme, neither does any environmental assessment exist for any aspect of that.

So what did we learn today? Well essentially An Bord Pleanala is a ‘clearing house’ or ‘rubber stamp’ for Government policy and we have absolutely nothing to do with their function other than they just collect public submissions at €50 a go from us, record them and ignore them. 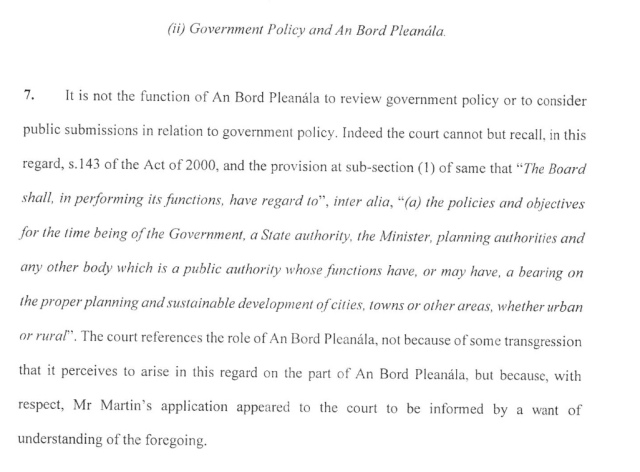 It gets deeper though, not only did the EU do the complete dirt on the public by adopting these National Renewable Energy Action Plans without any environmental assessment or public participation, but it went out and repeated this exercise in 2013, by adopting a Regulation on Projects of Common Interest (PCIs) to provide fast track planning and billions of funding to some 150 transboundary electricity projects. At the moment there is a UNECE Aarhus Compliance Case (C-96) on-going on this which is very near completion. But in summary that compliance case proves as to how no environmental information was available, as it simply did not exist. The public in the Member States were never informed. Instead an obscure EU consultation website was used, which only ‘insiders’ would know about and everything was in English only, which is ‘bugger all use’ to the majority of the EU’s 470 million citizens, who don’t speak English. The below is the sum total of environmental information relating to the North South Interconnector which the EU had, when it adopted the below on its 2013 PCI list. :

First of all even if we wanted to legally challenge the EU on this PCI Regulation, we can’t as EU Citizens have no access to the European Court of Justice to do so, a position in which the EU is in contempt of a ruling at UNECE against it. Therefore, one has to try and take an indirect challenge through a project, such as the North South Interconnector. However, it is position the judge adopted on this Article 7 of the Regulation above, which is very interesting (despite what we had argued / presented):

• Article 7
‘Priority status’ of projects of common interest
1.   The adoption of the Union list shall establish, for the purposes of any decisions issued in the permit granting process, the necessity of these projects from an energy policy perspective, without prejudice to the exact location, routing or technology of the project. [Emphasis in bold]

So it’s just like Animal Farm, where the pigs (especially Napoleon) decide and the animals have to toil building windmills, as Squealer the pig explains it:

• “No one believes more firmly than Comrade Napoleon that all animals are equal. He would be only too happy to let you make your decisions for yourselves. But sometimes you might make the wrong decisions, comrades, and then where should we be?”

1 Response to Plus ça change, plus c’est la même chose