Cans can bounce (back) 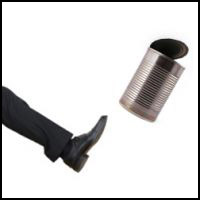 There have been a number of interesting comments on Nigel’s blog of last week, “Kicking Cans”. One of those was a link to a German article by a medical doctor on important new research regarding the dangers of infrasound emitted by wind turbines. The ever tenacious Nigel de Haas has again offered his literary and editing skills by providing a readable translation of this article, which I reproduce here (the highlights and spacing are mine):

Infrasound – the boomerang of energy sources

Dr. Thomas Carl Stiller is a specialist physician of general medicine and co-founder of “Doctors for Emission Control” (AEFIS).

People living in proximity to wind power plants often describe their complaints concerning low-frequency noise (infrasound) from these plants as “I feel what you cannot hear.”

But what is the cause of infrasound, what impact does it have on people, what standards regulate the permissible sound emissions and what is the state of science on these issues?

Inaudible but biophysiologically effective sound is not science fiction but an increasing threat to health.

First, a few physical bases: sound is the pressure change in a medium such as air and spreads around the source. The lower the frequency, the more sound is transported in the air. Very low frequencies are also transmitted through closed buildings. As a result of acoustic reflections and superimpositions, it can then lead to excessively high sound pressure values. In general, sounds and noises are described by frequency, timbre and volume. The human ear can hear frequencies approximately in the range of 20,000 Hz, i.e., vibrations per second (high tones) to 20 Hz (low tones). The sound range above a frequency of 20,000 Hz is referred to as ultrasound, below 200 Hz as low-frequency sound, below 20 Hz as ultrasound. Both infrasound and ultrasound are no longer perceived by the ear, but the body has a subtle perception for infrasound, and some people are particularly sensitive to low-frequency sound. In nature, low-frequency vibrations are ubiquitous. For example, some migratory birds orient themselves by the noise of the sea which is transmitted over several hundred kilometres in the atmosphere.

The infrasound from wind turbines is still measurable for several kilometres1.

On the other hand, humans are often exposed to technically generated ultrasound in their immediate surroundings. In residential areas, in the age of energy efficiency regulations for new buildings, air heat pumps are increasingly used as energy sources, which are cheaper to purchase than many other heating systems. In operation, however, they are often annoying for the neighbours, if the compressors are too loud and run too long. Even more problematic are wind power plants, in particular the modern large plants, which are mostly placed in front of villages and settlements at a small distance from the housing development. A pressure wave is generated every time a rotor blade is passed in front of the tower; many people perceive this as periodic “thumping”, sometimes also at a distance of several kilometres. The consequences of technically generated infrasound are only gradually becoming understood. About 10 – 30 percent of the population is sensitive to infrasound radiation. These people, which in Germany number several million, develop numerous symptoms, which are now understood by more and more physicians. The lowfrequency oscillations from compressors and wind power plants cause stress reactions in these people, which manifest themselves in sleep disorders, concentration disorders, nausea, tinnitus, dysphasia, dizziness, cardiac arrhythmia, fatigue, depression and anxiety disorders, earaches and permanent hearing impairments.

From a physiological point of view, there is damage to the hair cells of the cortical organ of the auditory canal and to permanent irritation in cerebral arteries, such as the amygdala (anxiety centre)2.

Effects on the heart and blood vessels included diseased changes of the connective tissue in the arteries of the pericardium (heart bag) detected in experiments3 with animals which were exposed to infrasound for a long duration. Those affected cannot escape the effects of health and harassment. They are often ineffective for a long period of time. A neurobiological habituation of sensitive persons on technical infrasound is not known. It is often falsely asserted that the symptoms are attributable to the attitude of persons concerned about the sources of the infrasound. Unfortunately, this is not observed in medical practice; the symptoms are all sensitive.

Numerous international studies have been carried out over the last few years, but in Germany this research is not advanced and almost unknown at the political level. If the symptoms occur, however, those affected are often hardly in a position to react. Those who live in a residential area affected by low-frequency noise and infrasound radiation cannot usually move away if, for example, they have to sell their house, which has lost a lot of value due to nearby wind power plants.

Who can perform optimally in today’s working world if sleep deprived and unable to find peace and quiet in their home by pervasive infrasound loading4.

How long can those affected compensate for this healthily and financially? Infrasound-sensitive people are ensnared in a tragic dilemma: their complaints are not taken seriously and legally they do not go further because of the lack of emission control regulations.

The acoustician Steven Cooper, together with a wind farm operator in Australia, investigated the effects of infrasound on the local population. Local residents in the vicinity of a nearby wind park complained about the above symptoms. But they did not have the wind farm directly in front of them. Cooper had their symptoms recorded at an exact time and checked the correlation with the activity of the wind power plants; the symptoms were strongest when the wind power plants were particularly active5.

In Denmark, information on malformed foetuses and miscarriages on a mink farm where wind turbine installations were subsequently built, as well as frequent reports of disease symptoms of people near wind power plants, led to a moratorium on wind energy expansion, pending completion of investigation of the connections.

The subject of infrasound radiation has also been taken seriously for some time6.  All previously valid protection standards, such as the Technische Anleitung (TA) noise and the DIN 45680, are based on the assumption that only sound which can be perceived by the ear can be damaged7. Other forms of the perception of sound are excluded. The measurement regulations are also not helpful, since only sound above 8 Hz is measured, although modern instruments can also detect frequencies of <1 Hz and the infrasound range in the range 1 – 8 Hz causes particularly severe health impairments.

The prescribed sound measurements also average individual frequency peaks. They are based on the decibel A filter, which follows the human auditory curve in the audible sound range and measures on many different frequencies rather than linearly and narrowly, as would be appropriate to avoid health hazards in the infrasound range.

Furthermore, often obsolete measuring systems and microphones that do not measure accurately enough in the infrasonic range are still permitted within the scope of the currently valid regulations for measurement. As a result, the measurement of the sound phenomena that are harmful to human beings does not take place below 20 Hz. Since these measurement regulations are the basis for approval procedures for technical systems, they must be adapted to the current state of the art. There would be a direct effect if the standards and regulations for the approval procedures of technical installations were at the level of the international state of knowledge. Were the standards for sound pressure to correspond to the state of the art, the limits for infrasound pressure would be set lower, the models for the propagation of infrasound would correspond to the state of research and the construction of plants would be optimized in terms of emissions of low-frequency sound. If technical sources of infrasound radiation are not removed quickly and sustainably enough by wind turbines, public complaints will develop into a health boomerang with respect to energy sources.

A new national disease on a par with diabetes and cancer is now inevitable given the failure of governments to act. It is high time for politically responsible people to meet their protection obligation for humans and nature and to initiate the most important measures from the point of view of preventive medicine an immediate dismantling of wind power, greater minimum distances between humans and wind power plants, prioritise objective infrasound research coupled with modern measurement regulations in the corresponding DIN standards and stricter protective regulations directed at sound physics and biology.

6 Robert Koch Institute; “Infrasonic and low-frequency sound – a topic for environmental health protection in Germany?”, Communication from the Commission “Methods and quality assurance in environmental medicine”. Position paper of the doctors for emission control (www.aefis.de).

3 Responses to Cans can bounce (back)