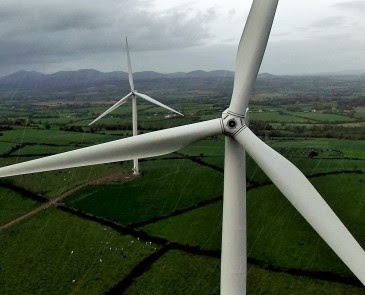 November 2015
NEWS RELEASE
.
Wind turbines generate infrasound that can cause serious health problems. The infrasound from wind turbines can carry through the air for tens of kilometres. This was verified in the measurements carried out in Finland.

.
This was the first time that infrasound generated by wind turbines was verified by measurements in Finland.

.
Tuulivoima-kansalaisyhdistys (TV-KY) ry – the National Association of Citizens against Giant Turbines – has recently released an extensive report on the infrasound emissions from wind turbines and their impact on people’s health.

.
The wind turbines being built in close proximity to residential areas in Finland are the biggest in Europe. Their rotating blades generate low frequency noise and infrasound, i.e. frequent and continuous air pressure pulses that can travel for very long distances.

.
Low frequency noise refers to frequencies between 20-200 Hz that are audible to the human ear, and infrasound refers to frequencies between 0.1-20 Hz that can’t be picked up by the human ear. Wind power companies, as well as some researchers, have claimed that “infrasound can’t cause adverse health effects as it is inaudible”. Similarly, we could maintain that radiation isn’t harmful as it is beyond sensory perception.

However, in the summer of 2015 the German Max Planck Institute released a study conducted using a new kind of measurement technology. Contrary to the well-established view, the study showed that the alarm mechanisms of the human brain are sensitive to very low infrasound that is below the hearing threshold.

.
The need for a survey conducted by the TV-KY Association arose when a growing number of residents in areas located near wind farms started to report health problems, some of which were serious. The measurements showed that the rapidly changing low frequency noise and infrasound caused by wind turbines can indeed be measured inside Finnish homes.

Low frequencies permeate the structures of buildings and they can be disturbingly distinguishable from background noise, particularly indoors. Infrasound, on the other hand, can’t be picked up by the human ear, but the residents complain over a great number of symptoms, some of which are serious. The emergence and degree of problems depend on the strength and length of exposure.

.
In Finland, large scale wind farms have only been constructed for a few years. We don’t yet have any records of the number of people who have had health problems caused by the infrasound emissions of wind turbines. .

For this report, we interviewed 12 Finnish families who live in close proximity to giant wind turbines in Finland, and we collected the experiences of 55 people concerning the health impacts of industrial wind power production. Out of these 55 people, 33 suffer from sleep disturbances, 26 from ear problems, 23 from headache, 17 from nausea, 11 from heart problems and 11 from inertia.

.
In addition to infrasound emissions, the audible low frequency noise of the up to 230 m tall wind turbines is directed with force horizontally away from the rotating blades, both downwind and against the wind. The massive air pressure pulse, generated by the blades, that varies with 1-2 seconds intervals, produces low frequency noise that isn’t actually directed at the foot of the wind turbine or on the side.

.
This partly explains why the interviewed residents in areas that are close to wind farms don’t react identically to wind turbine noise, which is at its worst during night time.

.
In our measurements, we used a microbarometer, an exceedingly accurate instrument for measuring atmospheric pressure. The measurements were carried out in homes that had reported adverse health effects caused by wind turbines. The report presents the noise measurements carried out inside the homes of some families interviewed in the survey. The infrasound emissions from wind turbines were clearly perceivable.

The report describes what types of well-known health problems are caused by infrasound and what kind of mechanisms are involved. In addition to this, the report contains basic information on the infrasound emissions of wind turbines and on how those emissions can be measured.

This report is first of its kind. Both foreign and domestic experts have been heard in the making of it, and it goes through a wide range of literature published on the topic both in Finland and in other countries.

The report has been prepared without any external funding, relying solely on voluntary contribution and support from international experts. Almost all other researches and surveys conducted on the problems caused by noise emissions from wind turbines in Finland have been funded entirely or partly by the industry. The Association expresses its concern over the small number of wind power research conducted independent of funding from the industry. The Association maintains that if wind farms are suspected of causing health problems, they should be investigated by independent medical researchers instead of simply denying the existence of problems.

The National Association of Citizens against Giant Turbines is an impartial and voluntary association working for the benefit of people and the environment.

.
The report Tuulivoimaloiden infraäänen aiheuttama terveysongelma Suomessa (Health problems in Finland caused by infrasound from wind turbines) is available in its entirety on the web pages of the Association: http://tvky.info/tiedostot/infra_aani.pdf

Neil van Dokkum (B. SocSc; LLB; LLM; PGC Con.Lit) Neil is a law lecturer and has been so since arriving in Ireland from South Africa in 2002. Prior to that Neil worked in a leading firm of solicitors from 1987-1992, before being admitted as an Advocate of the Supreme Court of South Africa (a barrister) in 1992. He published three books in South Africa on employment law and unfair dismissal, as well as being published in numerous national and international peer-reviewed journals. Neil currently specialises in employment law, medical negligence law, family law and child protection law. He dabbles in EU law (procurement and energy). Neil retired from full-time practice in 2002 to take up a lecturing post. He has published three books since then, “Nursing Law for Irish Students (2005); “Evidence” (2007); and “Nursing Law for Students in Ireland” (2011). His current interest is the area of disability as a politico-economic construct. Neil is very happily married to Fiona, and they have two sons, Rory and Ian.
View all posts by Neil van Dokkum →
This entry was posted in EU Renewable Energy 2020 Target, Wind Turbine Syndrome; Professor Alun Evans and tagged Adverse Health Effects of wind turbines, Al;ex White TD; Green Paper on Energy Policy in Ireland; New Ross, Alan Kelly; Labour Party; wind turbines; setback distance, EcoPower; Ecopower Developments Limited; Waterford City Council; Waterford County Council; wind farm; County Development Plan, Rabbitte; cancer; EMF; expert panel; Catherine McGuinness; EirGrid; Chief Scientific Advisor; Michael Repacholi; WHO; ICNIRP; leukaemia; Dennis Henshaw; Dr Graham Roberts; Grid 25; Fianna Fail; Fine G. Bookmark the permalink.