.
This was the cry that used to begin all public (and clandestine) meetings in South Africa during the dark days and the struggle against the apartheid regime. Pronounced “aah-mun-dluh  are-where-too” it means “Power to the People” and was used as a cry of hope when things were particularly bad and the struggle against a powerful foe seemed to be never-ending and incapable of being won, but also as a cry of celebration when victories, however small, were achieved and there was a glimmer of what might be.

I sang these words out when I read about the successful leave to appeal achieved by People Over Wind. It was testament to the struggles of so many good folk fighting against a morally corrupt government and its big-business allies.

In a previous blog (RTS & Ors -v- An Bord Pleanála [2015] IEHC 18 – lessons learned) which was written against a background of a devastated community after losing their review against the decision of the ABP to grant planning permission for a an industrial wind site, I tried to explain the decision of the review court to one member of that community who had written me a heartfelt letter. It was a difficult blog to write and I am glad that the story has not ended there, because it was a story of decent people trying to preserve the beautiful country that we live in.

It is also the story about the Nore Freshwater Pearl Mussel. 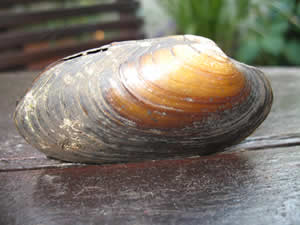 This mussel (Margaritifera durrovensis) is not known to occur anywhere else in the world. The species name, durrovensis, comes from Durrow in County Laois. The Nore mussel is only found in the hard (limestone) waters of the River Nore. There are about 500 individual adult Nore pearl mussels left alive in the world today and these all live in a short stretch of river between Abbeyleix and Ballyragget (thanks to Mieke Muyllaert, Ecologist, for that information).

As wind turbines contaminate ground water, and the construction of industrial wind farms often produce harmful sediments which run into rivers, the building of a massive wind farm in the vicinity of the oyster beds poses a lethal threat to the mussel’s survival.

If you have read my previous blogs you will remember that the terms “to seek leave” is the legal method of asking for permission, usually to go from a lower court to a higher court.

The decision of the High Court needed to be challenged, and on that basis People Over Wind (POW) and the Environmental Action Alliance Ireland applied for Leave to Appeal. For the purposes of this blog I will concentrate on the arguments put forward by POW.

.
1. The points of law which are proposed are of exceptional public importance and
2. That it is desirable in the public interests that an appeal should be taken to the Court of Appeal (which is the new court above the High Court and below the Supreme Court).

.
This is what the applicant had to do in order to convince Judge Haughton, who was the judge that ruled against RTS and the others in their judicial review application.

As previously mentioned, the bar is very high. In Glancre Teoranta v. An Bord Pleanala and Mayo County Council [2006] IEHC 250 the High Court held that:

“lt is clear that the statutory regime which has been devised by the legislature indicates an interest to ensure that the planning process is not to be hampered by a completely unrestricted access to the court which may cause harmful delays. I am satisfied that it is a restriction to be lifted only in exceptional cases.”

In other words nothing must be allowed to stand in the way of “progress”.

Against all these odds, the applicants stuck to their guns and argued their case and would you believe it – they won!

The applicants argued that proper consideration had not been given to their arguments relating to environmental impact on the Nore Freshwater Pearl Mussel (NFPM) and the requirements of the Habitats Directive regarding the conservation objective of restoration for a species (the NFPM) and its habitat; the best scientific evidence in that regard; and finally regarding the question of the adequacy of mitigation measures.

.
The applicant argued that the unfavourable conservation status of the habitat and species central to this case was a novel aspect not previously considered by the Irish courts. Judge Haughton agreed that his interpretation of Article 6(3) of the Habitats Directive was at odds with judgments of the European Court. He held that the Habitats Directive was so fundamentally important to our planning law and that it was accordingly of sufficient public importance that the Court of Appeal give a definitive ruling on the meaning and implementation of Article 6(3). Essentially the debate over Article 6(3) is whether it imposes an obligation on the authorities to take positive steps to enhance/improve a protected habitat or merely to preserve the status quo, irrespective of the condition of that habitat. That is the question that the Court of Appeal will need to answer.

The learned judge agreed that the law was uncertain over the interpretation and implementation of Article 6(3):

“In my view, it could be argued that my conclusion on restoration is at odds with the decision in Sweetman, and an incorrect interpretation or application of Article 6(3). The decision on this question also has a knock-on effect in respect of the evidence that must be presented to a competent authority for its consideration and ‘appropriate assessment’. I accept that my decision may give rise to uncertainty amongst environmental and other experts involved in the preparation and presentation of Natura Impact Statements (“NIS”) in respect of other planning applications and the nature of the ‘best scientific evidence’ that must be adduced and considered,…”.

“The restoration of habitats or species that are damaged/endangered must be recognised as an important part of this regime, and the question of the extent to which planning authorities must have regard to restoration as a conservation objective when undertaking appropriate assessments is, I am satisfied, one of exceptional public importance, as this concerns the preservation of our natural heritage.”

The respondents were wailing and gnashing their teeth and bemoaning the fact that it was critically important for the country that they get their wind farm up and running as soon as possible and that this appeal would delay their plans to do that. The judge was cutting in his reply:

“The force of Coillte’s argument is somewhat undermined by the fact that the proposed windfarm development is a commercial development. Ultimately it is primarily intended to produce profit for Coilte. The fact that it may contribute to Ireland meeting its renewable energy targets is not necessarily proven, but even if that is assumed, the primary objective is that of a successful commercial enterprise and the public benefit to the State would seem to be secondary.”

The applicants were also successful in their two other arguments, namely that the Court of Appeal will also be asked to decide what was the extent of the duty of the ABP to “to seek or procure the best scientific evidence in carrying out an appropriate assessment”, and thirdly, the law relating to the question of “mitigation measures arising from adverse affects identified on environmental impact assessment.”

These are all important questions of exceptional public importance which will now be answered by the Court of Appeal. Whilst questions two and three are important, it was mussel power that carried the day!

Well done lads. This was an important battle to win. Now go on and win the war. Amandla Awethu!