Sean Kelly reaffirms his support for the Anti-Pylon Groups 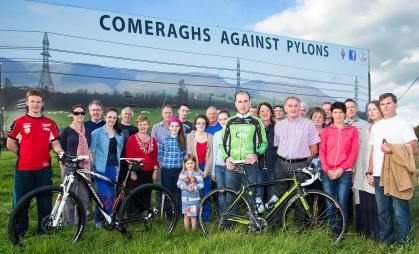 (Photo: thanks to Sean Byrne)

The great Sean Kelly publically confirmed his support for the Comeragh Against Pylons community group made up of volunteers doing battle with EirGrid and associated wind turbine companies.

The Sean Kelly Tour of Waterford on the 24th & 25th August is a good time to remind people of the ongoing support Sean Kelly has given the anti-pylon groups in the Comeragh Mountains area. He met again with representatives from the Comeragh Against Pylons, Comeragh-Rathgormack K9 Pylon Prevention and Portlaw Against Pylons groups and with representatives from the UNESCO Copper Coast Geo-Park on Tuesday 12th August to review progress on the campaign and to pledge his continued support.

The Sean Kelly Tour of Waterford was originally started 6 years ago to celebrate Sean Kelly’s acclaimed national and international sporting career. The Tour offers riders a unique experience of Co Waterford and the infamous Comeragh Challenge. The Tour provides a significant sporting and tourist boost to the communities of Waterford and in particular the Comeragh Area.

The Sean Kelly Tour is extremely successful and is heavily oversubscribed each year with a cap of 5,000 riders taking part annually and at least another 2,000 supporters and entourage. These numbers could be significantly multiplied such is the interest in this unique Irish sporting event.
There are four different routes to choose from over the two day event of varying lengths. Sean Kelly discussed in detail with the groups the importance of the 160km Comeragh Challenge within the tour. The breathtaking scenery and the sense of unspoilt nature and the challenge of nature, is what brings riders back annually and continually thereafter 365 days of the year. Sean Kelly believes that jeopardising this experience and national sporting event with 45m high pylons, one every 250m criss-crossing the Tour route a minimum of 8 times will ruin forever the natural splendour and International attraction of The Comeragh Challenge.

The local and national tourism benefit that is spread far and wide by the cyclists, sporting writers, and the cycling entourage is immeasurable and must be protected. Sean Kelly’s original involvement in the tour was to highlight and promote Co Waterford and all its hidden natural and unspoilt gems and none more so than The Comeragh Mountains. He is committed to giving his continued support to the anti-pylon groups, many of whom have worked tirelessly as volunteers over the last 20 years and more to maintain, develop and protect The Comeraghs in Co Waterford.

The groups have expressed their grave concern that the long since planned extension of the UNESCO Copper Coast GeoPark into The Comeragh Mountains will be jeopardised by the discussion alone of attempting to consider the routing of a 45m high 400KV industrial power line across the face of the Comeragh Mountains and through the very zone already planned for the UNESCO GeoPark extension into The Comeraghs at Crough Wood and Mahon Bridge.

Prof. Patrick McKeever of UNESCO has previously noted that the Copper Coast GeoPark aspiration towards expansion into The Comeraghs and going underground at Tankardstown are to be encouraged and lauded, and would result in a huge marketing opportunity for the County.
It is utterly incomprehensible to fathom why any Irish Government would permit Eirgrid, which is a government controlled and owned State Company, to continue the talk of such devastation and environmental vandalism on the Comeragh Mountains, not to mention the destruction to tourism and sporting events such as the Internationally acclaimed Sean Kelly Tour and to risk the collapse of the present program of the UNESCO GeoPark extension into the Comeragh Mountains.”

Neil van Dokkum (B. SocSc; LLB; LLM; PGC Con.Lit) Neil is a law lecturer and has been so since arriving in Ireland from South Africa in 2002. Prior to that Neil worked in a leading firm of solicitors from 1987-1992, before being admitted as an Advocate of the Supreme Court of South Africa (a barrister) in 1992. He published three books in South Africa on employment law and unfair dismissal, as well as being published in numerous national and international peer-reviewed journals. Neil currently specialises in employment law, medical negligence law, family law and child protection law. He dabbles in EU law (procurement and energy). Neil retired from practice in 2002 to take up a full-time lecturing post. He has published three books since then, “Nursing Law for Irish Students (2005); “Evidence” (2007); and “Nursing Law for Students in Ireland” (2011). His current interest is the area of disability as a politico-economic construct. Neil is very happily married to Fiona, and they have two sons, Rory and Ian.
View all posts by Neil van Dokkum →
This entry was posted in Uncategorized and tagged Aarhus Treaty; Aarhus Convention; UN; EU; windfarms; NREAP; Pat Swords; Rabbitte; environment; wind turbines; consultation; EirGrid; GridLink; John Lowry; Fine Gael; Fianna Fail; Labour Party; Green P, Comeraghs Against Pylons; Sean Kelly; Sean Kelly Tour; cycling; UNESCO; Copper Coast; GeoPark. Bookmark the permalink.